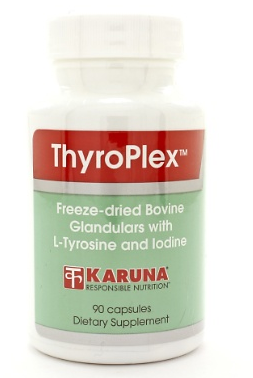 Freeze-dried bovine glandulars with L-tyrosine and iodine. The hypothalamus gland releases thyrotropin-releasing hormone, which stimulates the pituitary to release thyroid-stimulating hormone, causing the thyroid to release thyroxin and triiodothyronine. The amino acid, L-tyrosine, is a precursor of thyroxine (T4), the hormone secreted by the thyroid gland. L-tyrosine has been researched in connection with potential mood¿elevating properties. L-tyrosine is a precursor of norepinephrine, a neurotransmitter that suppresses appetite. L-tyrosine stimulates the release of Human Growth Hormone, which increases the combustion of body fat and the production of muscle tissue. Trace elements known to be important for normal thyroid hormone production and metabolism include iodine, manganese, zinc and copper.